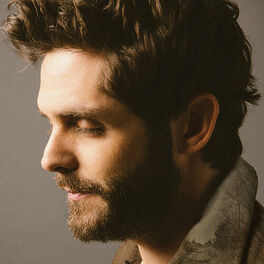 Christmas In The Country

Look What God Gave Her (Acoustic)

Light In The Dark

The son of singer-songwriter Rhett Atkins who topped the US country charts in 1996 with the single 'Don't Get Me Started', Thomas Rhett was extremely young when his mother started playing him Led Zeppelin songs, and he always seemed destined for a musical career of some sort. Born in Valdosta, Georgia, he thrashed around in emo punk bands in his youth before being spotted playing country rock covers and given a developmental publishing deal at the age of 20. Dropping out of college and moving to Nashville, he penned tracks for Joe Aldean, Lee Brice and Florida Georgia Line and soon had several labels offering him recording contracts. Signing to Valory Music, his love of vintage crooners Merle Haggard and Hank Williams and rock legends The Rolling Stones and Lynyrd Skynyrd evolved into a modern, polished, country pop sound on early singles 'Something to Do With My Hands' and 'Beer With Jesus'. Full of Southern swagger and boyish, pop star looks, Rhett's debut album 'It Goes Like This' in 2013 became a big crossover hit, reaching number six on the Billboard Charts and making him one of the breakthrough stars of the year. The album's fourth single 'Get Me Some of That' gave Rhett his second number one with 'Make Me Wanna' also achieving a top position on the Country Airplay Chart. He released the single 'Crash and Burn' in 2015, taken from his second album 'Tangled Up'. Once again, the album reached number one on the Country Airplay Chart, along with the singles 'Die a Happy Man' and 'T-Shirt'. His third album 'Life Changes' was released in 2017, preceded by the lead single 'Unforgettable'. The album also includes the collaboration with Maren Morris titled 'Craving You'. Artist biography compiled by BDS/West 10. All rights reserved