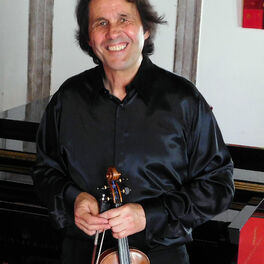 Volodja Balzalorsky is internationally acclaimed violinist. He is Two Time Winner and Four-Time Nominee of Independent Music Awards Volodja Balzalorsky is recipient of several further international music awards such as The Hollywood Music in Media Award, The Inland Empire Music Award, The Ontario Independent Music Award, The Canary Island Music Award, Julij Betetto Music Award. Numerous highly praised concerts, broadcasts, CD and TV recordings in various countries have established his reputation as an artist with a sensitive, intelligent, and intuitive gift of interpretation, a polished technique, and a rich, full tone. After his successful performance in the international cycle Violin Virtuosos in Belgrade, the esteemed critic in former Yugoslavia, Slobodan Turlakov, defined his artistic personality with the following words: Volodja Balzalorsky is passionately devoted to violin, inspired by the flame which distinguishes the most refined and authentic violinists capable of building the dramaturgy of musical works in the most natural and persuasive manner. His interpretation calls for an exalted and compassionate listener, which is the d i s t i n c t i o n of rare and predestined musicians...(Vecernje Novosti, Belgrade). Volodja Balzalorsky has been a guest artist at international festivals and concert series in various countries such as Italy, France, Austria, Belgium, the United Kingdom, Germany, Serbia, Slovenia, Croatia, Bosnia and Herzegovina, Macedonia, the Czech Republic, Slovakia, Turkey, Portugal, Norway, Denmark and USA. Volodja Balzalorsky is particularly active in the field of chamber music. He works with many international groups and ensembles, and for several years has successfully performed in DUO with pianists Christoph Theiler and Hinko Haas. Critics comment on the degree to which he is able to develop and maintain unity with his musical partners in this milieu, presenting ...an exceptional harmony of ease and authenticity of performance. He is a member of renowned Amael Piano Trio (www.amaeltrio.com). In 2015 he started to play in Duo with renowned pianist Aleksandar Serdar (www.aleksandarserdar.com). One of his specialties is the development of a repertoire for violin solo and percussion. Volodja Balzalorsky performed in the Percussion Plus Project at the Interlochen Arts Centre, Indianapolis, Greencastle, DePauw University, in the United States, and repeated in Prague and in Venice, Italy, with much acclaim. Balzalorsky's special interests include the promotion of contemporary music. Several known composers have written music especially for him. Volodja Balzalorsky has made extensive live and archival radio and TV recordings throughout Europe and the United States. Recently four CDs were released as part of his LIVE Collection, with 5 more planned for release on the CANTABEL label, supported by the Slovenian Ministry for Culture and the City of Ljubljana, with added releases by EROICA, a well known US Label that features great classical artists worldwide. The live collection of Volodja Balzalorsky, is a unique presentation featuring the violinist with his chamber music partners, from 1985 to the present. The performances are taken from live national broadcasts, international festivals and concert series, around the world. Volodja studied music with Igor Ozim, at the Musik Hoschschule in Cologne, Germany, at the P.I. Tchaikovsky Conservatory, in Moscow, with Galina Barinova, and with the famous Czech violinist, Josef Suk at the University of Vienna, Austria; completing his studies with Josef Klima, at the University of Zagreb, Croatia, where he received his post graduate degree. Volodja Balzalorsky is presently Professor of Violin at the Music Academy at Ljubljana University. His teaching represents an important complement to his artistic career. His pupils have won many national and international first prizes and awards. He regularly gives Master Classes in conjunction with his performances internationally. VIOLIN PIAO DUO OF VOLODJA BALZALORSKY AND PETER CAELEN The violinist Volodja Balzalorsky and the pianist Peter Caelen started to play together in September 2017. They performed together at International Concert Series "Excellent Concerts 2017" in Eisden, Netherland, at "Alba Music Festival 2017" in Italy, at Maene Concert series in Rerkem, Belgium. Big success was China Tour In November 2017: Duo Volodja Balzalorsky and Peter Caelen gave concerts in 13 Chinese Million Cities at prestigeous Chinese Concert Halls, such as the Beijing Concert Hall, the Concert Hall of the Shandong Grand Theater in Jinan, Hangzhou Grand Theater and others, with a program with only works by Johannes Brahms. In Reviews are mentioned Duo's superb artistic skills, their perfect chamber music cooperation, and an unforgettable presentation of the magical music world of Brahms, for which the Duo was everywhere rewarded with long-running applause by enthusiastic audience.