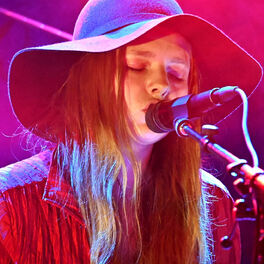 I Wish I Were

Stings of a Rose

EQLovesFestival 2019 - Anthems: We Are Here

Anna Grelle is a folk-pop artist, songwriter and music producer from Sweden. She has a bachelor's degree in music production from the Linnaeus University in Växjö and has been producing her own music since 2014 when she released her first single "Stings of a Rose", which has been played on Swedish radio. Since then, she has also released the singles "Du Ljuger" (2019) and "Wash Away Love" (2020). In 2021 she won the district finals of the nationwide music competition Livekarusellen in Uppsala, where she performed her own songs with piano and vocals. This year, she releases five new singles that culminate in her debut album "Emotional Storms" in June 2022. The first single "I Wish I Were" was released on February 18 and has received rave reviews from blogs. Anna is also a semi-finalist in the International Songwriting Competition 2021, which is one of the most prestigious songwriting competitions in the world. The song she is competing with is her upcoming single "Young Hearts" which will be released on March 11. ​ Inspired by artists such as Aurora, Ane Brun, Birdy and Elina, Anna produces music that contains both electronic and acoustic elements. Her clear singing voice is mixed with everything from soft pianos to expressive string arrangements, powerful choirs and cinematic drums. The lyrics address relatable topics, such as feeling inadequate, not knowing which way to go in life and trying to accept that time only moves in one direction – forwards.