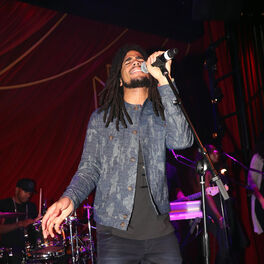 Johnny Was (From "Yardie")

Lions (Skip Marley vs The Kemist)

Chained To The Rhythm

Having a famous family member can make it hard for any performer to emerge from the shadow cast by their relative's artistic legacy and in the case of reggae artist Skip Marley, his grandfather Bob is a particularly hard act to follow.

In 2015 Marley released his debut single 'Cry to Me' prior to embarking on a lengthy tour with two other significant members of the Marley dynasty, his uncles Stephen and Damian.

Having thus served his time in the family business Skip Marley began to make his own way in the world and signed a solo deal with Island Records in 2017. His debut for the label was the single 'Lions' which subsequently went to number two in the US reggae charts. Marley followed this up with the single 'Calm Down' which reached number eleven in the US and to round off a stellar year for the newly-established reggae star he co-wrote and featured on the Kate Perry single 'Chained to the Rhythm'. The track was certified gold and platinum around the globe and resulted in numerous industry accolades including a live performance at the 59th Annual Grammy Awards ceremony.