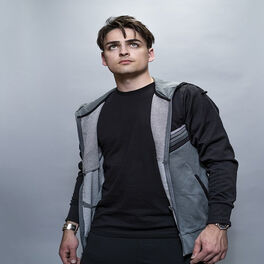 As an American pop-artist with a large Latin following, RJ Word is quickly rising to the top of full-fledged international stardom. Growing up in the heart of the entertainment industry, Los Angeles, RJ developed a passion for singing and songwriting early on, kicking off his music career by age 10 performing on stage in musical theater productions. During this time, he attended the highly-accredited performing arts school Los Angeles County High School for the Arts (LACHSA), garnering a theatre major, film minor and an eclectic collection of improv and dialect skills. Outside of school, RJ began developing his own sound with the help of renowned voice coach Roger Love (Michael Jackson, John Mayer, Demi Lovato, Maroon 5). He has since honed his craft for over a decade as a singer, songwriter and producer. Now, at 22 years old, RJ’s stage acts have advanced to performing his own handful of hit original singles to audiences by the thousands, while his fanbase consists of over a million fans worldwide. RJ’s international acclaim stems from his uniquely curated sound and goal to produce music that branches outside of the status quo. He’s released hit after hit, including “Here Today” which premiered on NBC Universo, “I’m Gone” which garnered millions of views and high praise for the dance skillset he showcased within his music video, and “Hold Tight” which topped charts in over 14 countries. His worldwide fanbase has led him to perform around the globe – including 93Q Summer Jam 2018 in NY (alongside Rita Ora, ROZES, etc.), Navi Fest 2016 at Arena Monterrey, Mexico, EXA Festival in Puebla, Mexico, and House of Exile 2017 in NYC. RJ uses his music videos as a creative opportunity to fully immerse himself in the filmmaking process through his knack for directing, acting, dancing and photography. With RJ’s versatile talent and massive global fanbase, headlining names in the music industry today have been quick to take note and eager to collaborate with him. Most recently, RJ was featured alongside Pitbull and Rich The Kid on Juan Magan’s Latin-pop single “Echa Pa’ Acá,” with an accompanying animated music video. Upon release, the track soared across Spotify ‘New Music Friday’ playlists worldwide and the Apple Music charts. The music video has garnered over 21-million views since its release. This year, RJ has focused his energy on releasing original singles, including his electro-pop-funk tracks “Do You?,” “You Played Yourself” and “Love Hurts.” One after the next, the singles have showcased his ability to seamlessly transition from genre to genre. With these releases and many more to come from the young recording artist, RJ continues to break through the mold of monotonous tracks that dominate radio airplay today and shape the future of music. While his talents spanning across the music and film industries – both in and out of the studio – set him apart as an all-encompassing, standout entertainer.