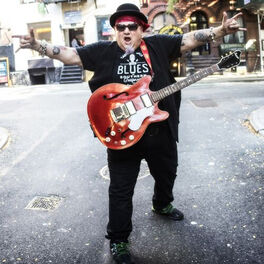 It's A Mighty Hard Road

Prime Cuts-The Very Best of the Beast from the East

I'm Feelin’ Lucky (The Blues according to Popa Chubby)

Back To New York City

The Fight Is On

How'd a White Boy Get the Blues?

Born Ted Horowitz in 1960 in the Bronx (and still living in the State of New York), Popa Chubby is the true son of the Big Apple. He started playing in backing bands for a few local heroes such as punk poet Richard Hell and Pierce Turner, an Irish songwriter. But it turned out that a strong tempered man like Chubby couldn’t be always overshadowed by someone. Signed to the Legendary O-Keh/ Sony label in 1995 he released his Major Label Debut produced by the legendary Tom Dowd (Aretha Franklin, Eric Clapton). Popa now manages his career independently, through his own production company (PCP - Popa Chubby Productions). His music is a blend of modernism and respect of traditions, casting sidelong glances at jazz, rock, funk and rap melted into this raw urban energy that makes its vigour. Here is his brand new opus celebrating 30 years of Career !