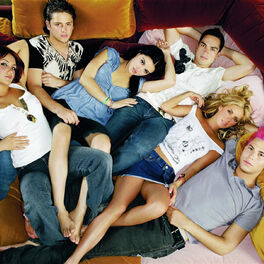 The musical band RBD emerges in 2004 after the success of the Mexican soap opera “Rebelde”, made up by its protagonists Anahí, Chistian Chávez, Dulce María, Maite Perroni, Christopher Von Uckermann and Alfonso Herrera; but soon they left the small screen in order to write in the world of Pop Music in Spanish, a reality that overcame fiction. Their debut album ‘Rebelde’ (2004), gave off great radio hits in Mexico: "Rebelde", "Solo Quédate En Silencio", "Sálvame" and "Un Poco De Tu Amor". And soon it became Gold Record, then Platinum and later on Diamond Record for more that 500,000 copies sold in Mexico. After the success, ‘Rebelde’ is published in a Portuguese version for Brazil. From the first band’s tour called "Tour Generación RBD", a CD and DVD were released and received a Platinum Record in Mexico. A year later, RBD releases into the market their second production ‘Nuestro Amor’, which brands the band’s evolution since its formation. Shockingly, after selling 127 thousand units, the album earned a Platinum Record just 7 hours after being released for sale in Mexico. In May 2006, the album is published in Portuguese under the name ‘Nosso Amor Rebelde’, obtaining Double Platinum Record for more than 80 thousand copies sold in Brazil. ‘Live In Hollywood’ is the second live album by RBD, recorded during their first show in Los Angeles at the Pantages Theatre, as part of their world tour Tour Generación 2006. The album got a Double Platinum Record in the United States and Gold Record in Mexico. During their US tour, RBD performed in front of 65, 000 people at the Coliseum in Los Angeles, selling every single ticket for the stadium in just a matter of 30 minutes and becoming the second show with the highest income in the venue’s history (right after The Rolling Stones). The band sold out every show in their opening tour around the United States, from Madison Square Garden in New York to the American Airlines Arena in Miami. Later on, RBD returns to Rio de Janeiro in October 2006 to become the first Spanish-speaking band to give a show as main artist in the history of the Maracaná Stadium, the largest in the world, before 120,000 fans. The DVD ‘Live in Río’ premiered one year later in Brazil, the United States and Mexico. ‘Celestial’, their third album arrives in November 2006, catapulting the band on a global level standing out with a Gold Record in Romania, Spain, Chile and Ecuador, as well as Platinum and Gold Records in Mexico. If it wasn’t enough, they conquered the American audience, reaching #1 on the Billboard Latin Pop Albums. In Brazil, the success replicated, placing them in #1 on the main charts, thus, a month later, Celestial was also published in Portuguese, debuting on place #17 of the Albums Top 30. After a successful world tour, where they sold more than 10 million tickets and after having consolidated as a success in the United States, RBD releases in 2006 their English album ‘Rebels’. With songs composed by Grammy Nominee, Diane Warren [she has worked with Aerosmith, Toni Braxton, Starship] with songs like “Tu Amor '' and “I Wanna Be The Rain”, RBD gets Gold Record in Mexico, Spain and Japan. Carrying on with global live hits, RBD releases on that same year their album ‘Tour Celestial 2007. Hecho en España’, recorded at Vicente Calderón Stadium in Madrid, in front of 40 thousand spectators. In a short, yet overwhelming career that started back in 2004 and kept on going until 2009, RBD became spokespersons for ecological and environmental causes, besides showing their pride for the Mexican heritage. Appropriately, RBD was asked to record the track "México, México", a great radio hit and official song of the Mexican Football Team for FIFA’s 2006 World Cup. ‘Empezar Desde Cero’, their fifth production [2007], obtained four Platinum and Gold Records in Mexico, Double Platinum in Venezuela, Platinum in Colombia, and Gold Record in countries such as Brazil, Argentina and Spain. Tracks like “Inalcanzable” and “Empezar Desde Cero”, got to #2 on Billboard Latin Pop Songs in the United States and #1 in Bolivia, respectively. Later on, their live album, ‘Live in Brasilia’, was recorded in front of half a million spectators at the Ministries Esplanade during Brasilia’s anniversary celebrations, in Brazil. Their sixth and final studio album, ‘Para Olvidarte De Mí’ [2009], without any doubt, was a bittersweet experience for their fans, in which they were bidding farewell to the musical scene in a more than successful way, positioning themselves as #3 of the Top 100 Albums of AMPROFON in Mexico, as well as #3 on the Billboard Latin Pop Albums for six consecutive weeks. From Mexico, Colombia, Chile and Brasil, and all the way to Italy, Turkey, United Kingdom, Japan, the United States and Spain, RBD broke the language barrier and imposed records, becoming the first Spanish speaking band to sell out the Maracaná Stadium in Brazil in 2006, as a main artist; besides being the most successful Latin-American band and bestselling for the more than 10 million albums that they sold on a global level, and the more than 10 million tickets they sold during their shows around the world. Nowadays, RBD musical legacy continues through the love and memories from their fans in the more than 150 official fan clubs they have in different latitudes. RBD, bring back the music!