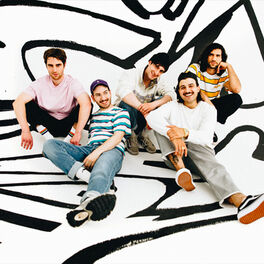 in between: Alternative & Pop

“L.O.V.E” is Leoniden’s first release since their acclaimed sophomore album, “Again”, which enabled the band’s breakthrough two years ago. Indie-rock hymns like “Kids”, “Nevermind” and “People” are the living proofs that the band's pop songs are radiant, full of kinetic energy, as well as cinematic, large-format choruses. Soulful female choirs, flickering guitar chords, driving bass lines, cleverly arranged polyphonic strings, a distorted lo-fi Wurlitzer and enigmatic, deep-toned brass sections shape the band's sound. Leoniden playfully combine influences hailing from several decades of music history enabling them to create their own and completely unique sound. Leoniden have had a steep career, starting as an insider tip setting fire to small clubs and ending up in the big venues. You have to see it for yourself: It’s a feeling you’d rather expect in Berlin’s techno clubs at the end of endorphin-impregnated nights. Anything can be expected: A guitarist who smashes his instrument on his own head, bongos in the circle pit, stage dives and high fives. All of this takes place night after night, because a single concert is not enough anymore. With “L.O.V.E.”, the band presents what it sounds like when one of the most exciting bands of the country makes its next move.