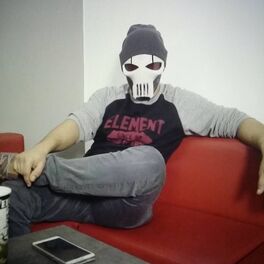 Spitting angry, sharp-edged rhymes while wearing the mask of obscure Star War character General Grievous, mysterious rapper Neo Unleashed started making waves on Berlin's underground hip-hop scene in 2015. His combative style was perfect for the head-to-head rap battle videos organised by social media personality Julien Sewering, and he showcased his skills in the Videobattleturnier and JuliensBlogBattle tournaments which drew millions of hits on YouTube. Though he lost in the final of the JBB to King EnteTainment, he built his reputation as one of Germany's best young gangsta rappers with tracks Bizzy Bizzy, Imperium and Eskalation and honed a style that was set against a backdrop of slow, industrial, doomed beats. Critics raised concerns about the promotion of violence and misogyny in his lyrics, but he appeared typically confident and full of attitude on his debut seven-track mini album HWNK in 2016. Released through independent label Ultimate Berlin (a subsidiary of Distributionz), the record made it to number 37 in the German Album Charts and featured Punch Arogunz and producer Vendetta Beats.