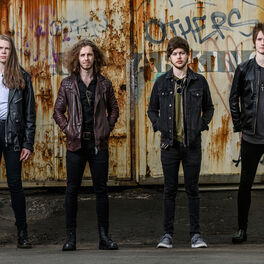 Whiskey In the Jar

UK rock band Anchor Lane released their eagerly anticipated debut album ‘Casino’ at the end of January 2020 which went straight into the Official UK Rock & Metal Albums Chart at Number 9, scoring the band their first Top 10. It also reached Top 20 in the Official Scottish Albums Chart and Top 50 in the Official UK Independent Albums Chart. ‘Casino’ garnered rave reviews across the board, showcasing the band as exceptional rock musicians and skilled songwriters. The album was written Anchor Lane in their hometown of Glasgow and was recorded at Vale Studios in the Midlands with renowned rock musician, writer and producer Toby Jepson (Wayward Sons, Gun, Little Angels). “Anchor Lane are ambitious with strength of character and real vision. Judging by the material they’ve come up with so far, they have a very big future" said Toby Jepson. The first single from the album, ‘Fame Shame’ received huge praise from music critics and fans alike with Planet Rock describing it as having “a glam-bang of a hook, which is brilliantly delivered”. This was followed up by second single ‘Dead Run’ which was co-written and features backing vocals by rock legend Ricky Warwick (Black Star Riders, Thin Lizzy, The Almighty). “Anchor Lane have attitude, ability, swagger and most importantly songs. Their passport to a very bright future is assured” said Ricky Warwick. ‘Dead Run’ was described by Classic Rock as “A grungy, classy fist-raiser with gnarly verses and a palate-balancing chorus that invites singalongs” and was chosen as one of their ‘Tracks Of The Week’. Anchor Lane have built a reputation as a thrilling and dynamic live act. After coming to the public’s attention with their stunning debut EP ‘New Beginning’, the band toured incessantly securing notable guest spots with Cheap Trick, Eagles of Death Metal and Tremonti as well as performances at prominent music festivals Download, Isle of Wight, Stone Free, Belladrum and Hard Rock Hell. Anchor Lane are looking forward to getting back on the road with new dates to be announced very soon!