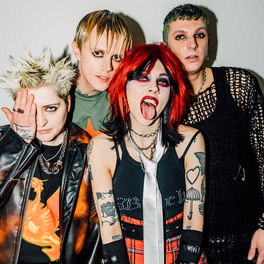 ALL THE THINGS I NEVER SAID

You Don't Own Me

Just You & I by Tom Walker

by All Time Low, Pale Waves

Pale Waves are a four-piece indie pop band from Manchester made up of Heather Baron-Gracie, Ciara Doran, Hugo Silvani & Charlie Wood. In early 2017 the band signed to UK independent label Dirty Hit & released their debut single ‘There’s A Honey’, which was produced by label mates The 1975. Shortly after this release they headed out on tour with The 1975, supporting them on both their North American and EU tours. The band went on to release ‘Television Romance’ late in 2017, selling out their own headline tours across the UK, Europe & North America.   2018 has since seen Pale Waves establish themselves as one of the UK’s most exciting alternative bands with a sound & musical identity unlike any other band of their genre. The band have developed a style of music which has influences as far back as The Cure but still manages to remain steadfastly modern. Their songs are instantly addictive, with huge choruses & broad appeal, described by The FADER as their ‘newest indie-pop obsession’. Alongside the release of their debut ALL THE THINGS I NEVER SAID EP, which contained singles such as 'New Year’s Eve' and 'My Obsession', the band were announced as the #5 artist on the BBC Sound of 2018, later winning the NME Under The Radar award & performing at the ceremony at Brixton Academy.   Pale Waves debut album ‘My Mind Makes Noises’ is available now & looks to cement their status as one of the UK’s most exciting alternative bands.