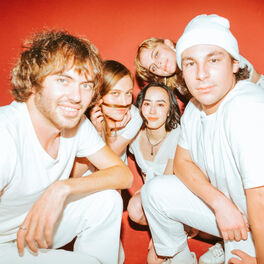 Next Time Read the Fine Print

You Got It All (NOT)

Formed in the fall of 2016, Vassar College’s Spud Cannon originally came together as a group of complete strangers. Setting out to make their own brand of “music you could dance to at a dormitory basement party”, they quickly developed a repertoire of original material and began playing house parties.   After winning Vassar College’s Battle of the Bands, the band flew to Los Angeles to cut their debut record in 7 days in guitarist Jackson Walker Lewis’s basement. Following a sparsely attended but raucous set at the Peppermint Club in which glassware literally shattered due to the noise level, actor Gary Oldman agreed to lend his voice to the album’s opening track. “Next Time Read the Fine Print” was self-released in October 2017, and became a surprise DIY sleeper hit on the college radio circuit.   Their sophomore effort ‘Squeeze’ was self-released in November 2018, and went #3 in the college radio top 200. It also brought the band to bigger stages, opening for , , , , and many more.   In 2019 the band embarked on their disastrous second national tour which covered nearly 7,000 miles in 14 days, including a pit stop at SXSW. Unable to secure a space for a final show, the band began exploring other options, eventually deciding upon a squash court on campus. Inspired by the acoustics, the band sneakily recorded their upcoming album, ‘Good Kids Make Bad Apples’, there. It will be their first release for Good Eye Records.