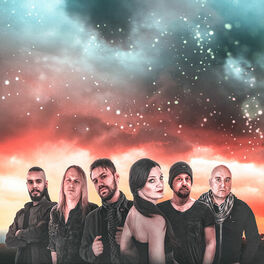 Before I Say Goodbye

The Tree of Life

Into the Heart of the Sun

TRAGUL is a multi-national symphonic metal project founded by keyboardist and composer Adrian Benegas in 2017. A band with an exceptional vision right from the outset, features an insanely talented cast of collaborators that includes spanish singer Zuberoa Aznarez (Diabulus In Musica), american guitarist Steve Conley (Flotsam and Jetsam), paraguayan guitarist Diego Bogarin, german bassist Oliver Holzwarth (ex Blind Guardian, ex Rhapsody of Fire, ex Tarja) and dutch drummer Sander Zoer (ex Delain). The innovative band TRAGUL breaks the mold taking their unique brand where no metal band has gone before. They are trailblazers on the unique “song-by-song” format releases, which consists on releasing single tracks during the year accompained by visual support such as videos and lyric videos. Even with its brief musical path, TRAGUL is recognized by its potential. Since june 2017 to the date, the band has released 9 singles so far, widely acclaimed by critics, internet presence, radio play, tv appearances, and great public acceptance around the world. Our format: No albums, no EPs. Just "single" music on its own! We often get questions about when are we gonna release an album or ep, etc, and the answers is always the same: right now we feel comfortable releasing music on this "song by song" format, but who knows if in the future we try other ways to release our songs. TRAGUL is an international symphonic metal project with a vision out of the box and so far it has coming out in a very positive way! We feel very proud by breaking the mold where no metal band has gone before, our productions comes in a unique format which consists on releasing single tracks during the year accompanied by visual support such as videos and lyric videos to stand out from the traditional path of albums and Eps.