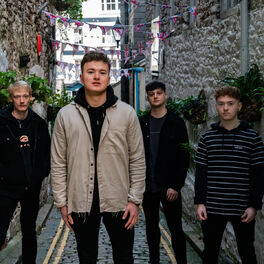 What Else Can I Do Wrong?

Parlour Suns are an Alt. Pop-Rock band formed in Plymouth, UK, 2020. In their first year as a band, they spent time writing songs to develop and find their sound. By February 2021, they had recorded 5 tracks at Momentum Studios with Josiah Manning as the producer, later mastered by Grant Berry of Fader Mastering. These songs are set to be released throughout 2021 and the band hopes they are received well by fans of both Pop-Rock, Alt. Rock, and Pop Punk genres. Parlour Suns are formerly known as With Notion, of which they received great support during that era from the likes of BBC Introducing, who broadcasted their tracks 'Give It A Try' and 'Drive Night' on BBC Radio Devon & Cornwall. As well as on the live scene, opening shows for Hopeless Records own 'ROAM' in Exeter and former Pure Noise Records 'Forever Came Calling' in Plymouth, along with their other notable achievements of being included on German Record Label 'KROD Records' Punk Rock Spotify Playlist and Discovered Magazines 'Break Through' Spotify playlist for February 2020.