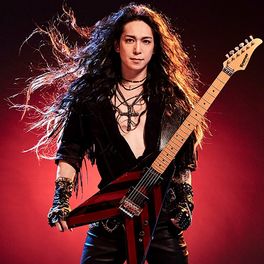 Joined by Ronnie Romero [Rainbow, Lords Of Black], Marco Mendoza [The Dead Daisies] and Tommy Aldridge [Whitesnake], Japanese Heavy Metal Guitarist Nozomu Wakai set out to release new album “METAL SOULS”. DESTINIA‘s new album “METAL SOULS”, created by the strongest lineup, is set to be unleashed in spring 2018 via Ward Records in Japan and later in the summer via Frontiers Records in North America and Europe.   Nozomu sees long-term potential in DESTINIA, claiming there are ‘songs that need to be written, developments that need to be made’. Here comes the new guitar hero that will shape the new standard for classic rock, with a mix of classic and modern heavy metal.