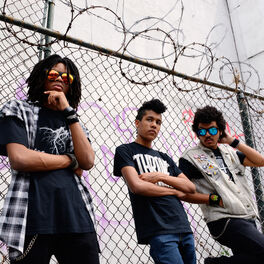 You Can't Judge a Book by the Cover

You Can't Judge a Book by the Cover

Radkey is a punk band from St. Joseph, Missouri that is made up of three brothers. Dee the lead guitarist and vocalist is into learning to read and write Japanese, watching anime and enjoys books by Stephen King, Michael Crichton and Edgar Rice Burroughs. He hates milk and not only because of his lactose intolerance. It’s the kind of hate that comes from deep down inside, the kind of hatred you would hold towards someone that has wronged you in an unmentionable way. He does have a soft spot in his heart for cheese though. Isaiah the bass player and middle brother watches a shit ton of movies…I’m talking HOLY SHIT! That’s a lot of movies. Some of his favorite directors include Guy Ritchie, Robert Rodriguez and Wes Anderson. Please don’t mention X-Men 3 around Isaiah because it may cause a rant that will make you wish you had never been born. He reads comic books, manga and fiction by J.R.R Tolkien, George R.R. Martin and C.S. Lewis. He plays all kinds of video games including first person shooters, RPG’s and no he does not play Angry Birds “phone games don’t fucking count”. Solomon the drummer and youngest brother has burned hundreds of hours playing Halo, Mario 64 and several other video games. He loves the Kansas City Royals and Chiefs and doesn’t care what anyone says about it. He can’t get enough spicy food and he can be found putting sriracha chili sauce on and in just about anything. Comic books and anime are high on his list as well as the movies of Edgar Wright. He hates flying insects with stingers, but he loves beef jerky. They also like music.