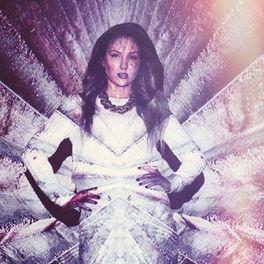 Eveliina Tammenlaakso, aka Evelina, is a Finnish singer and songwriter who took part in the first series of 'The Voice of Finland' in 2012. In 2015 she featured on the single release 'Takajeejee' by JVG which reached number one in the Finnish Singles Chart. She signed for record label 'M-Eazy Music' in 2015, and released her debut solo album '24K' in 2016. The album made history in Finland by becoming the first album to reach platinum sales before its release date. It reached number two in the Finnish Albums Chart and featured collaborations with artists Julma H, JVG, Mikael Gabriel and Eevil Stöö. The singles 'Honey', featuring Mikael Gabriel, and 'Sireenit' both reached number one in the Finnish Singles Chart. The singles 'Sushi' featuring JVG and 'El Filtterii' were also both hits, reaching number three and number two respectively. In 2016, she also participated in the TV show 'Star of the Stars' and featured on the soundtrack to the Finnish version of the film 'Trolls'.