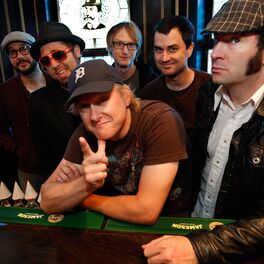 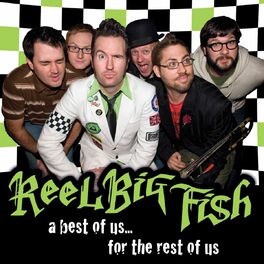 The Best Of Us For The Rest Of Us

The Best Of Us For The Rest Of Us

Monkeys For Nothin' And The Chimps For Free

Turn The Radio Off

Me First and the Gimme Gimmes

Founded by Aaron Bennett, Reel Big Fish hit on a highly original formula of giving punk attitude to ska and reggae rhythms which triggered a ska revival in the 1990s. Their debut album 'Everything Sucks' was well received, but it was the second 'Turn the Radio Off' - in particular the hit single 'Sell Out' in 1997 - which gave them success and they appeared in the 1998 movie 'BASEketball' playing a cover of A-Ha's 'Take On Me'. Their third album 'Why Do They Rock So Hard' was less successful and several members of the band left but replacements were found and the band was back in the US charts in 2002 with 'Where Have You Been?' and had further success in 2005 with the album 'We're Not Happy 'Til You're Not Happy'.

In 2007 they formed their own label to release 'Monkeys for Nothin' and the Chimps for Free' and followed it with a covers album 'Fame, Fortune & Fornication' in 2009. 'A Best of Us for the Rest of Us' was released in 2010 featuring 22 previously released re-recorded tracks and a separate 14-track disc of skacoustic versions produced by lead singer Aaron Barrett. They embarked on a 20th anniversary tour for 2012 with Matt Appleton of Goldfinger coming in to replace Scott Klopfenstein who departed the band the previous year.

A new album of all original songs was revealed for 2012 under the title 'Candy Coated Fury'. They co-headlined a UK tour with Less Than Jake in 2014 and began work on new material. This transpired into their ninth album, 'Life Sucks... Let's Dance!', released in 2018.