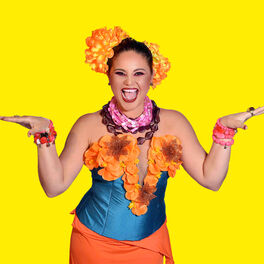 Alexandra Nícolas was born in São Luis, in the state of Maranhão — Brazil. She was raised by three women: her mother, her grandmother and her aunt. That's the origin of the feminine strength of her singing, which she began practicing at 12 years of age in samba circles with her family. There, the "singing girl" was always invited to showcase her talent. While still in school, she joined a band named "Hocus Pocus" that cheered up parties at school and friends' homes. She started singing professionally at the age of 17, when her band was invited for a stay at Eden Gallery in downtown São Luis. After a triumphant premiere — packed house every time! — she worked with great names of Brazilian popular music such as Hilton Assunção, Marcelo Carvalho and world-renowned percussionist Papete. She left São Luis in the early 1990's to study singing, dance and theater in Rio de Janeiro. There, she deepened her musical studies, working with Spanish teacher Paulo Barcelos. She studied theater with actress Camila Amado. She also practiced Flamenco Ballet at Casa da Espanha. Meanwhile, she also graduated in Speech Therapy at Universidade Estácio de Sá. When she returned to São Luis, she performed in several concerts to crowds of more than two thousand people. A tireless researcher of the rhythms and roots of popular Brazilian music, she conceived and performed in shows such as "Balangandãs" (2003), dedicated to Carmen Miranda and the female singers of the golden age of radio and "Senhora das Candeias" (2009-2010), fully dedicated to the work of Paulo Cesar Pinheiro and the influence of African culture on Brazilian music. This show involved 12 professional dancers. The latter would eventually turn into her first studio album, "Festejos", (Acari Records, 2012). The record featured unreleased compositions from Paulo Cesar Pinheiro (alone or in partnership with Wilson das Neves, Roque Ferreira and João Lyra). The album was produced by Luciana Rabello with arrangements by João Lyra and Maurício Carrilho. The album was released at Teatro Rival in Rio de Janeiro and Teatro Arthur Azevedo in São Luis. Both events were covered nationally by the press. In 2018, Alexandra Nícolas released her second stuio album, "Feita na Pimenta", dedicated to rhythms from Northeastern Brazil, featuring playfulness and subtle and provocative double-entendres — something that was lost in modern commercial Brazilian pop music. The record features compositions by Zeh Rocha, João Lyra, Roque Ferreira and Paulo Cesar Pinheiro, among other national names. She also recorded songs by composers from Maranhão, notably Marco Duailibe, Cesar Nascimento and Betto Pereira, who gifted her with songs especially for the album. She also sings the gut-wrenching duet "Teu" with Zeca Baleiro, who is also from Maranhão. The album was hailed by the biggest music critics of Brazil on their blogs. She released the album in the biggest venues of the genre in a national tour that went to Rio de Janeiro, São Paulo, Belo Horizonte and São Luis. This album earned Alexandra two awards: a Troféu Gonzagão, as a superior performer of northeastern music, and Prêmio Papete, for being the artist who most spread Maranhão's music throughout Brazil. After recently moving to Ottawa — Canada, Alexandra intends on warming the hearts of Canadians with her hot, strong-rhythmed, spicy songs.