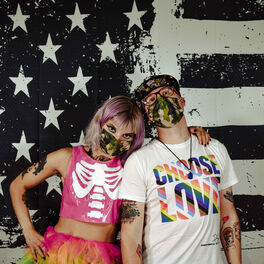 No Pleasure Only Pain

Make It out Alive

Riotous rockers Tokyo Taboo have built quite a reputation for their spectacular, character driven, and often shocking vibrant live performances. With glowing comparisons to Deap Vally, Halestorm, and Juliette & The Licks, Tokyo Taboo drop their much awaited new single, American Dream, on September 11th. Composed of the feisty and ferocious pair Dolly Daggerz and Mickey Danger, the Londoner’s debut album, 6th Street Psychosis, brought them acclaim from the likes of Radio X’s John Kennedy, BBC Radio 1, Clash and Punktastic. The duo have been hard at work on their upcoming album, recorded in California by Noah Shain (whose most recent production Badflower’s ‘Ghost’ recently occupied the Number 1 spot in the US rock chart). Their second album showcases how diligently the band have honed their sound since their debut, developing musical layers and refining production to create something utterly unique. The music video for TT’s new single American Dream is one of the first deepfake videos of its kind using AI technology to add Trump’s face to a body double. TT super fan Steve Lodge acts as Trump’s body double in the video. Expert deepfaker Brian Monarch then swopped Steve’s face for Trump’s to create an uncanny and realistic lookalike. In the video Trump wears a nappy, sits in a high chair and sings the words of the new single (ironically written about him). Baby Trump grows more and more angry towards the end of the video. He throws a tantrum, splattering food all over his chest and hurls his milk bottle away out of shot. Dolly, lead singer and co-director of the video explains, ‘We wanted to play on the idea of fake news. In this strange world we are living in it’s hard to know what is real and what is fake. When watching the video we know that it’s not actually Trump but part of us believes it might be and we second guess ourselves.’ The band urge the world to ‘DUMP2020’ and have released their own anti-Trump series of teasers for their music video. ‘The song is anti everything Trump stands for,’ Dolly explains: ‘The misogyny, narcissism, racism and right-wing idiot politics that are out dated and tiresome. We can’t just stay ‘in our lane’ and stand by anymore. Politics and music go hand in hand and this is our way of fighting everything the current POTUS represents.’ American Dream is out now via TT Records