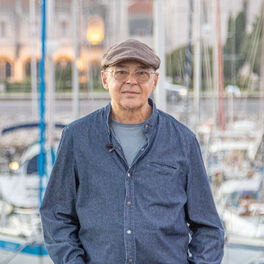 Tiago Araripe is a Brazilian artist (living in Portugal) with a diverse musical (and poetic) background. He merges styles and influences that extend from Brazil's Northeast popular culture to international pop music he came to know on the radio as a child. Living in São Paulo in the 1980s, he recorded "Cabelos de Sansão" - an acknowledged vinyl album reissued in CD 26 years later - in which the singer and composer plays along with a variety of musical genres. The freshness of sound and intense combination of influences goes on to his following album "Baião de Nós" and the EP "Na Mala, Só a Viagem" - the last one also the name of his latest concert. In July 2021, Araripe released the new album "Terramarear", featuring the Brazilian artists Zeca Baleiro, Vânia Bastos, Marcos Lessa, Isadora Melo, Nonato Luiz and the Portuguese singer Mara. It was recorded in Portugal and Brazil, with musicians from both nations and another countries. Tiago Araripe's songs have a strong poetic presence, sometimes in humorous rhymes but also through sensitive and reflective lyrics.