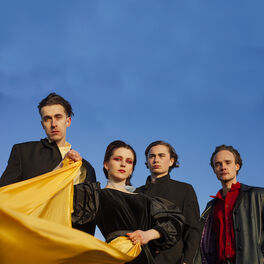 What’s On Your Mind

Only Ever (Single Edit)

Tell Each Other Lies

Often found between the bric-a-brac and neon glow of their favourite Brighton drinking and planning den The Bee’s Mouth, as Thyla, Mille Duthie (vocals), Dan Hole (bass), Danny Southwell (drums) and Mitch Duce (guitar) find comfort in the sanctuary of their second home. Out of town, they craft explosive walls of sound from within a dock-side warehouse, culling and tailoring the sonic offspring with immaculate attention to detail. Kids of a musical upbringing, they eschewed the restraints of their childhood music lessons in favour of self-discovery on their own terms and through that, have honed a statement of intent that’s at times dark, but never been clearer; “Group ideology is a bad shout,” tells Millie. “You have the power to change life yourself, you can develop and take responsibility. It’s up to you.” Putting the personal over the political, the band’s first self-released EP Everything At Once stands defiant as it sees the 4-piece stoke their fire with former setbacks, the turmoil of family illness, juggling shitty day jobs, and navigating modern age induced anxiety. Their music finds strength to challenge expectation, make tough life decisions, and stand up for true art. “Our power comes from us being more united than ever,” tells Mitch. “We’ve been through so much that we rely on each other; every person’s DNA is in each song, especially now we’re doing everything ourselves.” Like their musical heroes My Bloody Valentine or Bloc Party, Thyla’s remarkable blend of vulnerability and beauty with aggression, intense volume, and distortion elegantly captures the frustrations and euphoria of their journey so far. “This EP has broken the wave; it’s entirely our own,” Millie affirms. “We’ve done it all independently and found strength from that. ‘Everything At Once’ sums it up; our music is all-encompassing, all that’s been before and the sound of where we’re going. This is us; ready to go!” Laid down across two locations; Everything At Once’s drums and bass were recorded at Brighton’s Electric Studio with producer Josh “Hoagie” Harrison (Royal Blood, British Sea Power, Blood Red Shoes) before the band decamped to Mitch’s countryside home to cram their gear and themselves into his intimate cabin studio. Reinforcing their declaration of independence, Thyla shot their own iPhone video for one side of the sky-blue Flying Vinyl release ‘Two Sense’ and ‘Lenox Hill’, enhancing the latter’s coming-of-age tale about Millie’s upbringing in New York City whilst her bold outfits offer a burst of colour against the blank canvas of Brighton’s salt-licked terraces. “We’ve been blown away by the positive response so far, it’s been a real vindication of everything we’ve been doing ourselves as Thyla limited,” they say. Whilst some artists decide who or what they are from the start and shape their music to fit, Thyla break the mould. Writing the rules as they go, music is at the front of all they do, and everything bleeds from there. “We’re playing the long game,” Millie tells, perhaps explaining why their debut album has been 5 years in the making. “Our favourite artists didn’t come from a meteoric rise, and like them we don’t want to be flash in the pan; we plan on doing this for a long time and on our own terms.” Praised for their knack of crafting stand-out singles since the release of their debut EP What’s On Your Mind, Thyla have stormed the airwaves on BBC Radio 1 (Huw Stephens, Jack Saunders) 6 Music (Steve Lamacq), and KCRW in LA. Making the most of Millie’s duel citizenship with debut US shows at SXSW, they’ve tantalised tastemakers on both sides of the Atlantic (Stereogum’s ‘40 best new bands’, Paste’s ‘Top 7 of SXSW’, NME's ‘Essential Acts,’ Dork's 'Top Tips for 2019,’ and Pitchfork). Live, their set is a taught, aural assault having shared stages with Slaves, Rolling Blackout Coastal Fever, touring with Bass Drum of Death, and entrancing festival goers at Live at Leeds, Isle of Wight, not to mention of course, The Great Escape where they hosted and headlined their own basement guerrilla show at their beloved Bee’s Mouth. As Thyla prepare to unleash their debut record upon the world, surely those P45s are destined for the band’s letterboxes any day now; “We want to push this. Music is our core and our solid focus,” Millie tells. “It’s scary, our whole lives have been building up to this moment but the period of refinement is over; our time is now.”