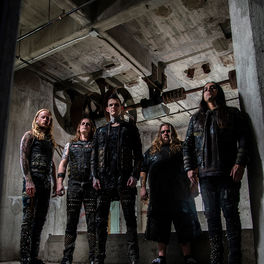 Bury Me in Blasphemy

Until I Feel Nothing

The Diseased And The Poisoned

Dead In My Arms

Fit For An Autopsy

Signs of the Swarm

With a reputation for demonic, grinding thunder and dramatic, vitriolic breakdowns, San Diego noise merchants Carnifex stand as one of the leading lights of the heavy metal sub-genre deathcore, playing music of extreme menace. Named after the Latin word for executioner, they formed in 2005 and built their sound around the guttural growls and pig-squeal vocals of frontman Scott Lewis, the blasting beats of drummer Shawn Cameron and the doomed, atmospheric riffs of guitarist Jordan Lockrey. Initially, though, they were seen as outsiders on the California metal scene. Ploughing their own path with relentless gigs and independent releases, their second album The Diseased And The Poisoned in 2008 won them wider attention and they toured across 22 different countries before returning home to record follow-up Hell Chose Me in 2010. As their sound gradually became ever darker and angrier on Until I Feel Nothing, the band went into hiatus, with Lewis suffering from anxiety and depression. Signing a deal with Nuclear Blast records, they returned as explosive and passionate as ever with Die Without Hope in 2014 and toured with Devildriver, Cannibal Corpse and Chelsea Grin before celebrating their ten year anniversary and releasing their sixth album Slow Death.