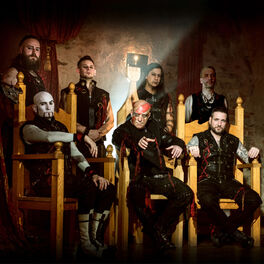 With a name derived from the German word for 'dance mania', Tanzwut are a heavy metal spin-off from the modern medieval ensemble Corvus Corax, adding dark industrial metal themes to Corvus Corax's purist approach to traditional music. Sharing some personnel, the two bands run in tandem to one another with Tanzwut appealing to a wider, less specialised audience. The band combine classic 12th century influences with heavy metal to create lavish, grandiose stage shows and have toured extensively building up a loyal following in markets as far away as South America. With a catalogue of 20 singles and ten studio albums released since 1999, the band have proved their esoteric blend of medieval metal has enduring appeal to their fans. In 2016 Tanzwut released the album Schreib Es Mit Blut (Write It In Blood).