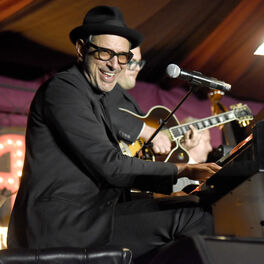 Hollywood film star Jeff Goldblum made his name in the blockbusters 'The Fly', 'Jurassic Park' and 'Independence Day', but his first love was always music and he has been playing weekly gigs in small jazz clubs since the 1990s. Growing up in suburban Pittsburgh, he was inspired by his father's Thelonious Monk and Nat King Cole records and began playing classical and jazz piano in local cocktail lounges. After moving to New York, his acting career took off and he landed small roles in films 'Death Wish' and Annie Hall'. Despite his huge success and worldwide fame, he continued to play regular, informal spots around Los Angeles with acting friend Pete Weller and producer John Mastro, naming themselves The Mildred Snitzer Orchestra in 1990 when they were invited to play at the Hollywood Jazz Festival.

Known for his eccentric, quirky personality, Goldblum led the band in good-time bebop jams, show tunes and loose, free-form jazz standards while performing improvised stand-up comedy routines and embarking on rambling, off-beat audience interactions. He also contributed a track for the 'Hollywood Goes Wild' charity album in 2001 before a collaboration with Gregory Porter on 'The Graham Norton Show' encouraged Decca Records to offer him a deal. It led to his debut album 'The Capitol Sessions' in 2018, which featured guest appearances from Imelda May, Haley Reinhart and comedian Sarah Silverman on his versions of popular jazz standards such as 'Cantaloupe Island', 'My Baby Just Cares for Me' and 'Me and My Shadow'.