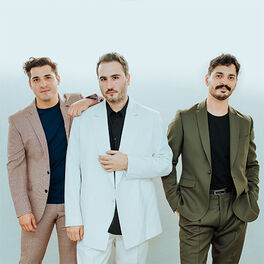 Bésame (I Need You)

de Made in Latino

Mexican pop rock band Reik were formed in 2003 in Baja California by vocalist Jesús Rosas and guitarists Julio Eguía and Gilberto Espinoza. The band began to grow an audience through the underground Mexican club scene when their singles 'Levemente' and 'Ahora Sin Ti' became club hits and established the band as an up-and-coming act. When they released their self-titled debut album it sold well enough in their home country to be certified gold and its mixture of pop songs and romantic ballads proved to be a successful recipe for the band's future albums.

Through frequent exposure on MTV the band gradually drew attention from American music fans and in 2005 embarked on a US tour. In 2008 their third album 'Un Día Más' won a Latin Grammy and was nominated for numerous other industry awards. With five studio albums to their credit the band have built up a solid following and their 2016 album 'Des/Amor' went to number one in the US Latin Pop Chart and was certified platinum in the process.