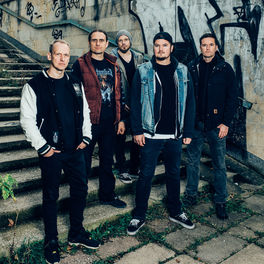 Of Truth And Sacrifice

Whatever It May Take

Deaf to Our Prayers

My Heart and the Ocean

Leaders Of The Extreme

Instead of getting stuck in the ever grueling cycle of studio recordings, album release and playing live HEAVEN SHALL BURN allowed themselves a well-deserved break. While taking the time off the band the individual members could recharge their batteries and gather new influences and ideas. Maik Weichert (guitars) says: “We decided that one album wasn’t good enough, but we wanted to create a double album as a statement. Our goal was a total work of art that people could dive into, something that leaves a lot of room for surprises and experiments. It was only fair to give our fans twice as much after letting them wait for so long.” Thanks to their more relaxed approach the band worked differently on “Of Truth and Sacrifice" than on all previous albums. Instead of recording the instrumental parts first and the vocals after everything was done they attacked both at the same time which really backed the vocal performance of singer Marcus Bischoff. He got additional support from the likes of Chris Harms from Lord Of The Lost, Matthi from Nasty and Andreas Dörner from Caliban. When it comes to the music you can look forward to their trademark HSB sound, but also to really atmospheric strings that the band fleshed out with Sven Helbig and recorded with conductor Wilhelm Keitel in Minsk. For the 90min documentary „Mein grünes Herz in dunklen Zeiten“ (= „My Green Heart In Dark Times“) renown producer Ingo Schmoll followed the band for almost a year in order to get to the bottom of the phenomenon HEAVEN SHALL BURN. The amazing artwork courtesy of Eliran Kantor (Testament, Iced Earth, Sodom) is topping off this very special album.