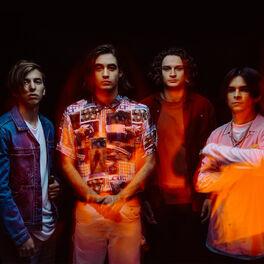 Summer Is a Curse

One Way or Another

Saints of the Sinners

The Faim are an Australian rock band formed in Perth in 2014 by singer Josh Raven and bassist and keyboard player Stephen Beerkens with lead guitarist Michael Bono and drummer Sean Tighe, who both left in 2018. Guitarist Samuel Tye and drummer Linden Marrisen joined in 2019. Their 2018 EP 'Summer Is a Curse' featured the hit title track and in 2019 they released an album titled 'State of Mind'. Their 2019 schedule was to include appearances at UK venues in Belfast, Edinburgh, Liverpool, Sheffield and Norwich; venues in Luxembourg, Germany, and the Czech Republic; and at USA venues in Houston, Dallas, Atlanta and Tampa.