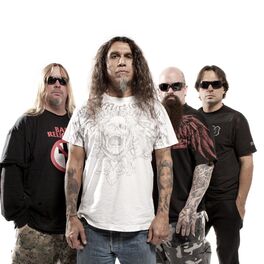 The Repentless Killogy (Live at the Forum in Inglewood, CA)

Soundtrack To The Apocalypse (Deluxe Version)

Soundtrack To The Apocalypse

God Hates Us All

Seasons In The Abyss

Exploring the depths of heavy metal's darkest, scariest moments, Slayer raged about Satanism, serial killers, war and necrophilia as they became one of the most controversial acts of the 1980s. Led by Tom Araya's growling, doomed howls and the ferocious, grizzled guitar of Kerry King, the band got their break when they were picked to appear on the seminal Los Angeles metal compilation Metal Massacre III, and quickly became a key part of California's underground rock scene. Their early albums Show No Mercy (1983) and Hell Awaits (1984) were raw, ragged, self-financed, statements of intent, before the Rick Rubin-produced Reign In Blood (1986) was declared "the heaviest album of all time" and became recognised as a landmark of hardcore thrash metal. Their speed, intensity and demonic onslaught stood them alongside Metallica, Megadeth and the great hard rock acts of the era and albums Seasons In The Abyss (1990) and Divine Intervention (1994) - which reached the US Top 10 - proved hugely influential to later generations of headbanging metal bands, including Sepultura, Pantera, Slipknot and Lacuna Coil. They reached Number 5 in the US with Christ Allusion (2006) and won Grammy Awards for singles Eyes Of The Insane and Final Six; and, despite the death of guitarist Jeff Hanneman in 2013 from liver failure, they continue be an explosive, full throttle force of dark heavy metal. Artist biography compiled by BDS/West 10. All rights reserved