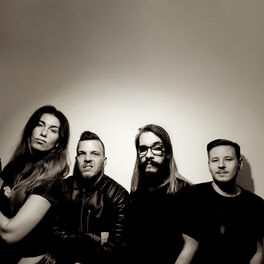 Originally the Grizzly-members founded Woodstock Barbie had only one aim: to try the Grizzly Engine under a lady’s ass. Between 2015 and 2018 they grinded six singers through the mincing machine, the finally Püré turned up and spit up the songs straight like it had to be done. The outcome is a 4 songs debut EP coming out in September 2019. Alexandra Pádár AKA ‘Püré’ comes from the jazz, swing, pop, r&b scene and had no idea about this dirty underground stoner world. Arián Horváth is the guitarist of the sludge-stoner Grizzly since since the dawn of Earth. Áron Vilczek AKA ‘Roti’ joined Grizzly more than two years ago as the bassist but he’s the founding guitarist of the gungey-rockey Run Over Dogs. Ádám Gilinger sits behind the drums, he played with the Bohemian Betyars for four years, with Antonia Vai Band for two years, been session drummer of Császári Pillanatművekbe and Nagy Edi Projekt, and since January 2019 also a member of Dungaree.