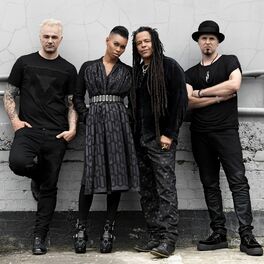 An Acoustic Skunk Anansie - Live in London (Live and Acoustic)

Pavarotti & Friends for Cambodia and Tibet

Hedonism (Just Because You Feel Good)

Brit rock band from London fronted by singer Skin. Playing their first gig at London's Splash club in 1994, the group quickly built a devoted following along with a vast media presence from their controversial live shows. Two of their songs, Feed and Selling Jesus, were featured in the 1995 film Strange Days, the publicity of which earned them a top 50 album. The band went on to expand their fanbase as they toured with U2, Aerosmith, Rammstein, Lenny Kravitz and Feeder. In 1996 they released the album Stoosh followed by Post Orgasmic Chill in 1999. In 2001 the band split with lead singer Skin embarking on a solo career. In that time, Ace also worked on a side album, Still Hungry, which featured collaborations with Skye from Morcheeba, Shingai Shoniwa from Noisettes as well as Lemmy and Cliff Jones. After eight years apart, the band reformed and released greatest hits album Smashes & Trashes. In 2010 the Wonderlustre album was released, followed by Black Traffic in 2012 and Anarchytecture in 2016.