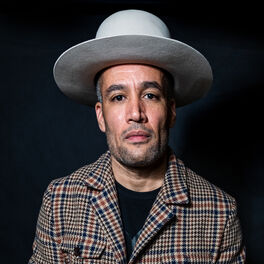 No Mercy In This Land (Deluxe Edition)

By My Side (Retrospective)

The Will To Live: The Live EP (Live)

Both Sides Of The Gun

Live From London (Live At The Hammersmith Apollo)

Live At The Apollo (Live)

Live At The Hollywood Bowl (Live)

There Will Be A Light

Diamonds On The Inside

From Here To Now To You

From Afro-American and Cherokee Indian descent, Ben Harper first started playing guitar as a child and in his teens specialised in the slide guitar style of one of his primary heroes, blues legend Robert Johnson.

He played his first gig at the age of 12 and, playing a Weissenborn lap steel guitar, went on the road with Taj Mahal in his teens, linking up with Tom Freund to record 'Pleasure & Pain' in 1992. His edgy songs and virtuoso playing won a lot of fans on his debut solo album 'Welcome to the Cruel World' (1994) and he became a popular fixture on the college circuit. Second album 'Fight for Your Mind' expanded Harper's style into gospel, folk, reggae and hard rock as he formed a band behind him called The Innocent Criminals. Regular tours in Europe and Australia increased his popularity while back at home in the US he embraced politics, playing on the Vote for Change concert tour in 2004. His 2006 double album 'Both Sides of the Gun' broke into the US top ten and reunited his Innocent Criminals band for 2007's 'Lifeline' album recorded in Paris. He then formed a new band Relentless7 for his 2009 album 'White Lies for Dark Times' and the following year he formed another new band Fistful of Mercy, which featured the late George Harrison's son Dhani, to work on his next album 'As I Call You Down'.

By 2011 Harper was back in the studio working on another album 'Give Till It's Gone'. 'Get Up!' followed with Charlie Musselwhite becoming Harper's 12th studio album. In 2016 Harper revealed the video to his new single 'Call It What It Is' which would also form the announcement of the album of the same name.