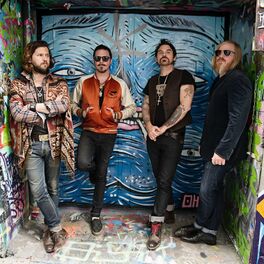 Live from the Haybale Studio at The Bonnaroo Music & Arts Festival

Back In The Woods

US rock band Rival Sons was formed by drummer Mike Miley, vocalist Jay Buchanan and guitarist Scott Holiday, three musicians who all played together in previous bands in the Long Beach area of California. The band's independently funded debut album 'Before the Fire' was released in 2009 and received positive critique in the music press which led to invitations to tour with bands such as AC/DC, Alice Cooper and Kid Rock. Significantly, they were also invited to perform at the Indy 500 motor sport event resulting in national TV exposure throughout the US. After releasing a follow-up EP the band were signed by English musician and producer Digby Pearson for his Earache Records label.

They subsequently embarked upon a punishing touring schedule throughout Europe and the US resulting in numerous sell out shows. Rival Sons have steadily built up a significant fan base with each album release outperforming the previous one. The albums 'Great Western Valkyrie' and 'Hollow Bones' released in 2014 and 2016 respectively both reached number one in the US Heat Charts and charted well throughout Europe and the US.