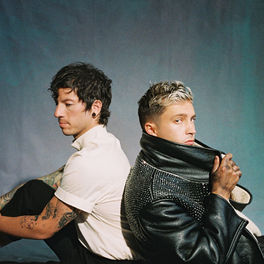 All My Favorite Songs: Pop-Rock Hits

Twenty One Pilots have been variously described as a hip-hop band, a rap act, an electronic duo and even a reggae group. In reality, any one of these descriptions could be used to cover the wide and varied stylistic tone of a band whose music is so hard to define it has been described by fans and critics alike as 'schizo pop'. Formed in 2009, the band was the brain child of lead vocalist Tyler Joseph who, along with bassist Nick Thomas and drummer Chris Salih, created the group and after a period performing as independent artists, signed in 2012 to the Warner subsidiary label Fuelled by Ramen. The label specialise in the management and promotion of alternative indie acts and the partnership proved mutually beneficial with the release in 2015 of the album 'Blurryface' which peaked at number one in Billboard's Album Chart selling over 1.5 million copies in the US alone and becoming a triple platinum certified album. Top selling songs from the album include 'Tear in My Heart', 'Fairly Local' and 'Ride' and the accompanying video to the track 'Stressed Out ' from the album has had over one billion views on YouTube. The band continue to be one of the most inventive, creative and successful acts within the US indie scene and have demonstrated by releasing a series of musically diverse singles that they can continually evolve and reinvent themselves. Artist biography compiled by BDS/West 10. All rights reserved