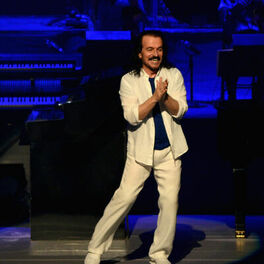 The Dream Concert: Live from the Great Pyramids of Egypt

If I Could Tell You

Yanni Live At The Acropolis

Known simply as Yanni, Yiannis Chryssomallis is a Greek musician whose electronic new age recordings have sold in the millions since his breakthrough in 1994 with an album and concert video titled 'Live at the Acropolis'. The video was televised around the world and the album topped Billboard's New Age Albums Chart and went to number five on the Billboard 200. He had played music since he was a child on the Greek island of Kalamata and after he moved to the United States in the 1970s he played in local bands while he completed his university education. He made his recording debut with 'Optimystique' in 1984 followed by several others until 'Chameleon Days' and 'Niki Nana' which both went to number two on the New Age Chart in 1989 and he now has a total of 35 releases on the chart with 17 number one hits including 'Reflections of Passion' (1990), 'In My Time' (1993),'If I Could Tell You' (2000), 'Ethnicity' (2003), 'Yanni Voices' (2009), 'Truth of Touch' (2011) and 'Sensuous Chill' (2016).

He has staged massive concerts at venues such as the Royal Albert Hall in London and performed at rare sites including the Taj Mahal in India and the Forbidden City in China with recordings from those dates featured on his 1997 release 'Tribute'. He has composed the music for several TV movies such as 'Steal the Sky' (1988), 'I Love You Perfect' (1989) and 'She'll Take Romance' (1990). Many of his big concerts have been televised including 'Yanni Live: The Concert' (2006) at the Mandalay Bay Resort & Casino in Las Vegas, 'Yanni: Live at El Morro' (2012) from Puerto Rico and 'The Dream Concert: Live from the Great Pyramids of Egypt' (2016). His 2014 album 'Inspirato', which featured guests including Plácido Domingo, Renée Fleming and Katherine Jenkins, which topped the New Age Chart also reached number two on Billboard's Classical Albums Chart. Compilation albums such as 'Devotion: The Best of Yanni' (1997) and the two-disc 'Ultimate Yanni' (2003) topped the New Age Chart while 'Very Best of Yanni' reached number three. His 2018 concert schedule includes performances in Florida, Georgia and South Carolina.