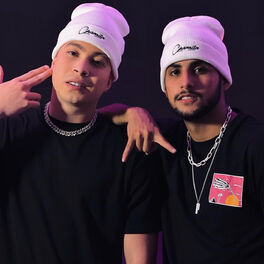 VICTOR&GABO is a Venezuelan Urban duo formed by Víctor Portillo (Vicsensa) and Carlos Espinoza (Gabo Boys). Víctor took his first steps in the music business as a soloist about 10 years ago, being known as Víctor "El Romántico" (The Romantic), composing his own songs and working along with other music related figures. Back then he gained a large local audience that continues to follow him after all this time. Gabo, in another hand, is a multifaceted talent, capable of establishing melodic lines together with rhythms in an urban and irreverent style where the "chanteo" stands out. His precise dance movements as well as his charisma are relevant characteristics of his personality. Víctor & Gabo met seven years ago when they jwere part of one of the most influential musical groups in Venezuela, called LOS BOYS. They were awarded as "Revelation Artists of 2019” in the seventh installment of the popular Pepsi Awards of Venezuela. The two televised seasons of their reality show are cataloged as the production with the highest rating and share of the last decade on Venevisión, with an enhanced reach throughout Latin America thanks to its joint transmission on YouTube. In 2020 they decided to regroup, this time as a powerful duo under the CODISCOS label and under the leadership of LS RECORDS.