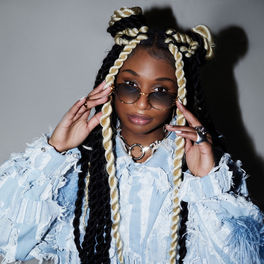 In the Mind of Mikey D

Nenny is Marlene Tavares, she was born in 2002 in Vialonga near Vila Franca de Xira. She lived in Portugal until she was 11 years old, when she moves with her mother to France, to the suburbs of Paris. In 2019 she moves to Luxembourg. The fact is that these different contexts of emigration in search of better living conditions and the constant need to start over are an essential part of Nenny's music. Music came to her early, as she grew up in an environment filled with it, as her parents, both Cape Verdeans, provided the house with a lot of funaná and kizomba. It was in this context that the artist ventured into writing her first lyrics to a song, when she was only 10 years old, a composition that addressed themes such as racism and prejudice. The next few years Nenny starts taking refuge in music to better express her anxieties and experiences, but only released her first song publicly in 2019, with the single “Sushi” on March 3rd. To “Sushi” joins “Bússola” two months later, and these two songs immediately catapult Nenny's name into the spotlight in the new Portuguese Hip Hop scene. In 2020, she released her first EP, “Aura”, which has 9 original songs including singles previously released as “Dona Maria” (song dedicated to her mother) and the hits “Sushi” and “Bússola”. Nenny's music combines several musical styles and influences. There is rap, trap, soul, R&B and afro.