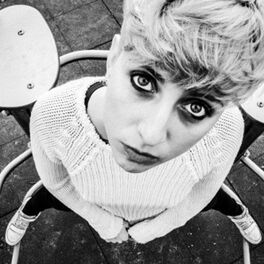 Noise of the Wing: An Apology for Annoyance

Out of the Dark EP

The Rain is Over and Gone Part 1

Hiss For The Fly

by Zentone, Johnny B., Una

Till The End Of Time

Marzia Stano (alias "UNA") was born in 1982 in Turin (Italy). A few months after her birth, her family moved to a little town in southern Italy (Apulia is the region), where althought her youth she already started writing songs. After several years ago, she went back up to north of Italy, these time to the city of Bolonia, where she studied at the Fine Arts Academy. She was the front singer and founder of her first band called JOLAURLO, with whom she had the chance to play at the top Italian Music Festivals and being the supporter band for many important national and international artists and bands such as Siouxie, Iggy Pop, Gogol Bordello, Battiato, Max Gazzè and Cristina Donà. In addition to that, she also worked and featured other important Italian musicians such as Vinci Acunto (Ginevra De marco, Teresa de sio, Taranta Power, etc..), Daniele Grasso (Afterhour, Jhon Parish, Le Loup Garou, etc). Up to the date, Jolaurlo has released 3 albums: “D'Istanti” (Tube Records Venus, 2005), “InMediatamente” (OTRlive/Tube Records, 2007) and “Meccanica e Natura” and all have received good reviews from numerous magazines from the music industry. For the occasion of The Human Rights Declaration, one of Marzia’s song was selected as the best text song. Since 2012, UNA has been working with Lucio Morelli (piano player of the Italian singer-songwriters: Max Gazzè or Paola Turci) aiming the composition of her first solo work, involving relevant artists as Angela Baraldi, Gianluca Bartolo (Pan del diavolo), Gianni Masci (Jolaurlo), Giacomo Fiorenza (I Cani, Colapesce), Andrea Mancin (My Awesome Mixtape, Giardini di Mirò). Last October 2012, in collaboration with Negrita, Subsonica, Mannarino and other reputated Italians musicians, UNA flew to Miami (USA) to take part at the Hit Week Festival. In April 2013, UNA will be presenting her first solo album to the main European cities' audience. This brand new release is called “Una, Nessuna Centomila” and it will be out in Italy under the label MarteLabel.