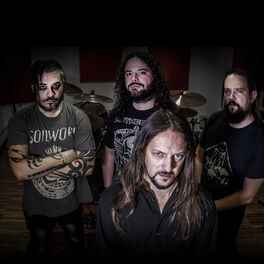 Quintessence of the most direct-in-your-face thrash-death style, Methedras sets among the leading Italian metal bands, a real war-machine which has been able to release few demos and five full-lenght albums during its 22-years old activity, as well as have performed hundreds of tours and festivals throughout the whole Europe (Wacken Open Air, Metal Camp, Evolution Fest), many of them in support of big names of the international metal scene (Testament, Overkill, Sepultura, Kreator, Morbid Angel, Exodus, Destruction, Dismember, Sodom and many others), without ever losing an ounce of anger and energy. Combo formed originally near Milan in 1996 with a double-guitar line-up, the band has changed over the years various members preferring in the end a solid line-up with only one guitar, arriving to a proper own style with no compromise: a sort of derived thrash metal spiced with more typical death metal influences and a groove-hardcore approach concerning the vocals. Previously under the flag of the American Pavement Entertainment, with the well-reviewed album "System Subversion" in 2014, the four Italians released their last effort "The Ventriloquist" in December 2018 through the historic German label Massacre Records, album recorded and mixed at the superb Domination Studio under the guidance of the mastermind Simone Mularoni.