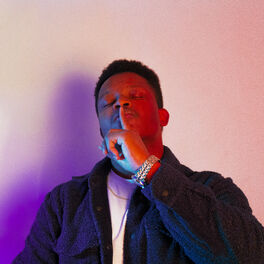 Uadamen, also known as Jefferson Agbebaku, is a Nigerian born vocalist, songwriter, producer, and business owner based in Canada. Uadamen started his music career in 2016 with the release of his first single 'Like That'. The track 'Like That' was previously released in 2015, but due to some complications with his decision to release music, Uadamen withdrew the track temporarily. In the Fall of 2016, Uadamen realized that he was ready for people to hear his music, and as a result, officially released 'Like That' again with a different Cover Art. 'Like That' has achieved over 150,000 streams on Spotify as of the Fall of 2021. Uadamen's current style of music is Dancehall, Afroswing, R&B, Soul, and Rap, and he plans on incorporating Jazz into his music in the near future. He is well-rounded and flows with music like it is a part of himself, even though he claims that he is tone-deaf.  Uadamen's sound is influenced by what he refers to as "the vibes." He remains current and is highly attentive to detail when it comes to his sound, he tries not to stick to a particular genre so he can jump at any opportunity that comes his way. Music has been a major influence in his life since he was 8 years but officially decided to pursue it in 2014, where he started recording his music in an official studio in Edmonton, Alberta (Canada). There are a few highlights in his career as an artist and business owner. The first is the inception of his own record label called All Fly Records. All Fly Records is a subsidiary of the parent company All Fly Studios, an entertainment company that deals with fashion, photography, cinematography, and music. As a manager under the All Fly Records, the second highlight of his career is working with artists such as Zarion Uti, a known Nigerian artist with over 40,000 monthly listeners on Spotify. The third highlight in his career is his decision to join his current music group FXRGN. His target is to grow his fan base, and work with major music groups like Major Lazer. As a creative artist who incorporates various genres in his music. Uadamen says, "Music should be sound that pleases the ear, it doesn't matter what you call it, what should matter is how you feel when you listen to it." His creativity and love for music expand his reach of pleasing his listener's ear. From, rap to soul, he strives to bring entertainment to life and for his listeners to visualize his music.