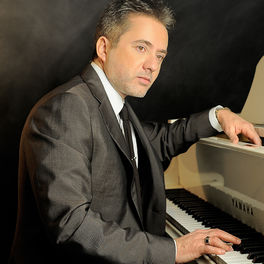 Marwan Khoury, the multi-talented singer, songwriter, and composer, is considered one of the most respected Lebanese artists. His singles and albums have been nationally and globally recognised with worldwide adaptations in many different languages. Khoury has performed in very prestigious venues like the Opera House of Egypt and Carthage. Marwan started his career as a keyboard player and music conductor and in 1987, he produced his first album “Kasak Habibi”. In 1996 Khoury released his first single “Fik Yamma Balak” and a couple of years later released his hit singles “Tia” (تيّا) and “Dalouna” (الدلعونا) and “Az Al Habayeb”. In 2001, Khoury composed and wrote his second album “Khayal Al Omer”. In 2004 he signed with Rotana and released his first hugely successful album “Kil Al Asayed”. The album was very successful and dominated the charts for many months. Throughout his career Marwan has been nominated for and rewarded with many prestigious awards including Best Song, Best Album, and Best Singer. Khoury has also been awarded the Murex D’Or two times.