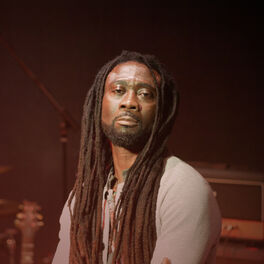 Ras Opoku (full name: Ras Steven Mahoney Opoku) was born in Ghana. He started singing very young and was one of  the representatives of his church choir at national competition contests. He has lived in Germany since1992 and played in the band Glashof Combo before joining Dread Fusion as a singer and songwriter. The band consisted of five members besides the lead singer Ras Opoku: Drummer Atta. B., bassist Oliver Walter, percussionist Ras Amarty Koﬁ and the two guitarists Michael K. and Kologbo. All of them are highly talented musicians.    Dread Fusion, initially created by Atta B. in 1997, combined many diﬀerent music genres: traditional Africanrhythms, funk, hip-hop, worldmusic and of course reggae. They came out at the top of the south German reggae scene with this unique mixture. “Yenka No Bokoo” was the ﬁrst CD released by the band in 1998, followed by “The Smile on your Face” in 1999, which was enthusiastically celebrated with a stunning release party at the Zelt-Musik-Festival in Freiburg. Dread Fusion’s uncanny ability to charm their audience with a great mix of genres, from universally well-known and beloved reggae tunes to refreshing originals,persistently ﬁlled every dance ﬂoor.    Now, Ras Opoku, with his new band “D´Jah-Nerations”, ﬁlls the concert halls again with the band's particular„AfroReggae“ tunes, which combine traditional African rhythms and Jamaican roots-reggae. Additionally, they supplement their stage perfomances with long proven classics and self written songs. Ras Opoku sings in two languages: in Ashanti, his mother tongue, and English. Ras Opoku and his combo are very much dedicated to their motto: 'spreading positive vibrations' which gives their live perfomances this unique feeling, all in the spirit of the 'Rasta Philosophy'.