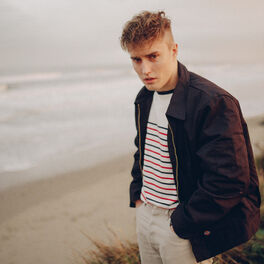 All Is On My Side

Will We Talk? (live at Capitol Studios, solo)

Will We Talk? (MK Remix)

Sam Fender is an English alternative rock singer-songwriter who grew up in a musical family near Newcastle-Upon-Tyne and began performing locally as a teenager. He signed a recording contract and garnered attention in 2017 with singles such as 'Play God', which reached number 89 on the Official U.K. Singles Chart and can be heard on the soundtrack of the 'FIFA 19' video game. Other 2017 singles included 'Greasy Spoon', 'Millenial' and 'Start Again'. He was named on the BBC's Sound of 2018 list and he won the Critics Choice Award at the 2018 BRIT Awards.

His 2018 singles include 'Leave Fast', 'That Sound' and 'Dead Boys', which appear on his debut EP 'Dead Boys' released in November 2018. The single 'Hypersonic Missiles' came out in 2019. His band features guitarist Dean Thompson, bassist Tom Ungerer, guitarist and keyboard player Joe Atkinson and drummer Drew Michael. His 2019 schedule was to include appearances at venues in London, Paris, Utrecht, Cologne, Berlin, Munich, Zurich, Brussels, Amsterdam, Manchester, Glasgow, Leeds, Birmingham, Exeter, Bristol, Warrington, Landraaf in the Netherlands and Bergen, Norway, plus the Glastonbury Festival in England.