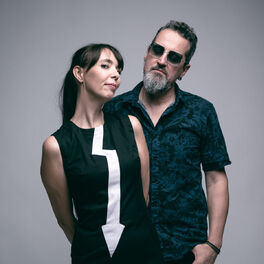 Noémie Chevaux, visual artist, actress, singer, she also plays keyboards and takes care of electronics. Fred Tavernier, singer and guitarist multiplying experiences within groups like YEALLOW from 2008, with Lee "Scratch" Perry in 2013 then TED from 2014. It was written: they could no longer continue to work separately. Noémie joins Fred at the microphone and the couple becomes a duo. Their coming-out finally materializes under the OUTED banner. Their new album is announced for spring 2021: The Matrix of Chaos. Curious disaster film title whose soundtrack could have been forged with hard metal. Que nenni: OUTED will offer something else and get back to basics, build real songs with verses, choruses, tunes that can be whistled in the shower or in the forest, texts with drawers that release new treasures to every listen. A bit like at Bashung, Thiéfaine or Manset. OUTED opens our ears, spreads our eyes… And the tears that sparkle are both melancholy and smile. The chemistry is perfect between flourishing rhymes, words that play with evils, natural arrangements and brilliant insolence pop craftsmanship. New album in pre-order ... In Vinyl version: https://www.diggersfactory.com/fr/vinyl/240791/outed-la-matrice-du-chaos In CD version: https://www.paniermusique.fr/chanson/4858-la-matrice-du-chaos-outed-3760301213079.html