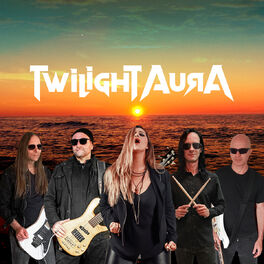 Twilight Aura is the new name for the Brazilian band previously known as "Twilight" This comeback counts with all the members of the band's last line up plus the addition of the great Daísa Munhoz handling the vocals! "Twilight" was formed in Sao Paulo, Brazil, in 1993 by Andre Linhares Bastos after his short stint with Angra's first incarnation, and also includes Rodolfo Elsas on the other guitar, Filipe Guerra on bass, Claudio Reis on drums, and Leo Loebenberg on keys. Since 2021, Daísa Munhoz (Vandroya, SoulSpell) took over the lead singer position. The first single, Watching the Sky, was released on February 2021 and the full-length album is in the works, to be released by the end of the same year.