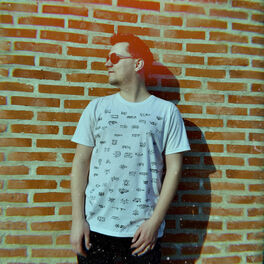 Oleksandr Danylenko (Russian: Александр Александрович Даниленко, born September 12, 1991), known professionally as Irelle Yoko, is a Ukrainian singer, beatmaker, rapper, producer, ghostwriter and songwriter, currently based in Buenos Aires, Argentina. Early life Yoko was born in Kiev, Ukraine, but raised in a small town in Bavaria, Germany. His mother is a housewife and his father was an Orthodox priest. Like many other children at that time, Yoko wanted to become a rapper. At a young age, his inspirations were Eminem, Chamillionaire, Daddy Yankee and the major part of the German and Russian Rap Scene. Long before adolescence, he began to experiment with these and other artists’ beats and writing his own lyrics in German and English. Because he did not have a computer until many years later, Irelle was using a simple notebook, which he still keeps as a reminder of how everything started. His family was constantly moving, which led him to suffer from prolonged bouts of melancholia and extreme introversion as he went through his teenage years without friends. He intensely disliked school. To deal with the stress of a rootless existence, Irelle started sniffing glue, smoking marijuana and crack, and drinking alcohol to excess at the age of 13. He tried to commit suicide a number of times, most recently when he swallowed a bottle of tranquilizers to fall asleep. Today, he maintains two full-time jobs to support his parents and three siblings. He works under an alias in HR and in Hospitality. Career Irelle began his career in 2005, where he started working in Propellerheads Reason. The internet helped him start his career and create a fan base that would, ultimately, result in him collaborating and writing for urban artists in Germany, Russia, Ukraine, and the Americas. From the many video he posts on his Instagram page, it appears that Propellerheads Reason is the only DAW he still uses to create and record nowadays. His most famous song, Midnight, featuring the Puerto Rican singer Tony Lenta, surpassed 1.000.000 plays on Soundcloud in November 2018. He has more than 1M followers on Instagram. Musical influences and style Growing up in a multicultural environment, Irelle today is known for being able to work in a variety of genres, including Reggaeton, Trap, Rap, and R'n'B. The content of his lyrics is based on real life events and experiences, and most of his melodies and beats range from deep and dark to diabolical and melancholic, with deep bass, futuristic melodies, punchy snares, low strings and often, a second melody for the chorus. Being a one man band, he owns his own recording studio and controls the entire process of recording, publishing and advertisement of his music. Record Label Irelle is the founder and CEO of Chaos Music (@thisischaosmusic), his own record label. Aside from music production, Chaos Music offers artists, producers, beatmakers and songwriters professional service in audio distribution, digital marketing, social media consulting and artist image improvement. Yoko also helps with music promotion in well-known Music streaming platforms such as Spotify, YouTube, Apple Music, Pandora, Tidal, Google Play, Soundcloud, Deezer and the like. Personal Life His interests include traveling, Anime and video games. He was involved in two prolonged relationships. One of these women, to whom he was engaged attempted to kill Irelle during the final days of their relationship. This altercation left Irelle with a prominent scar on his left wrist. He was raised and formally educated in a small town in Bavaria, Germany. Since December 2011, he has been living at an undisclosed location under an alias in Buenos Aires, Argentina. He speaks English, German, Russian, Bulgarian, Ukrainian and Spanish. He has three younger brothers whom he financially supports, but he lacks any meaningful relationship with his parents, who do not approve of his career or interests.