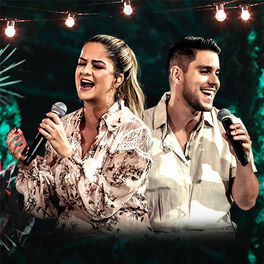 Te Ajudando a Me Esquecer

Maria Cecília and Rodolfo are a duo of Brazilian performers working in the música sertaneja (Brazilian country music) tradition.

The pair first met while attending college in Campo Grande in 2005. They began performing together and, with the support of Jorge & Mateus, released their first album 'Você de Volta' - a live recording - in 2008. It proved a success, leading to the release of a second live album and DVD, 'Ao Vivo in Goiânia', through Sony Music in 2009. A further live album and DVD, 'Ao Vivo in São Paulo', followed in 2010. In 2015 Maria Cecília and Rodolfo released their first studio album, 'Espalhe Amor'.

2012 saw the pair get married in Campo Grande and their first child, Pedro, was born in 2017. It meant a short break from recording and performing, but the pair returned with the Em Fases tour. In March 2019 they released 'De Portas Abertas'.