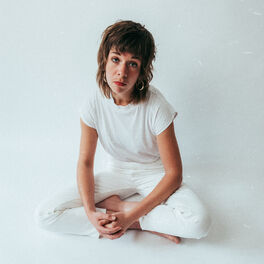 WAHNSCHAFFE THINKS BIG. THE COLOGNE MUSICIAN HAS BLOWN TO ATTACK CONVENTIONAL GERMAN POP. She doesn't want to be a singer who just smiles pretty and leaves making music to her male colleagues. Wahnschaffe is a full-blooded songwriter who effortlessly conducts her band and sometimes even a complete choir. With her soulful pop, she joins the ranks of great female artists who are in the process of revolutionizing the pop music scene, which is still strongly influenced by men. And this undertaking seems to have momentum. Wahnschaffe meets the pulse of the times: listening to their songs, you think rightly of Wallis Bird, of Mine, of Sophie Hunger, even of the oversized Billie Eilish. Filigree guitar work and strong vocals are complemented with sophisticated synthie arrangements and that interesting mixture of beats and organic percussion that expands the horizon of contemporary pop. Their lyrics are personal and honest without being there, strong in character and courageous without being pompous. No more the umpteenth decal of female feel-good pops! Give us complex, well thought-out sound architectures that trust the listeners and want to demand something from them again! The crazy single "Courage" (release 18.10.2019) of the now released EP is therefore to be understood as programmatic for their creative work. It is about courage to fill a gap, empowerment and self-assertion against social attributions. She is convinced: "Beauty is diversity. But to stand by oneself in a society that has a very narrow picture of it is difficult. It's about time we got more confidence in ourselves and stopped thinking that we had to play along. The best thing to do at home is to turn up the song mega loud and show courage! "Courage" has proven madness with their new EP and at countless concerts all over Germany. Now one can be curious how it will go on.