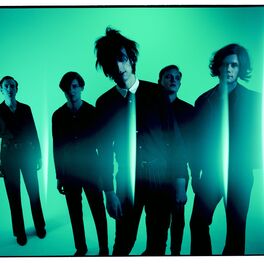 Something To Remember Me By (Gabe Gurnsey Remix)

Something To Remember Me By

Sea Within A Sea

Underneath a mass of dark hair, skinny jeans and a pouting gothic gloom, The Horrors take the stance of a zombified gang of 1960s garage punks resurrected to save the UK music scene from a sea of indie clones. United by a love of dusty vinyl, The Cramps and all manner of obscure pre-punk guitar bands, the members of The Horrors met while DJ-ing around London and Southend and were soon being hyped to the eyeballs by the NME.

Stark and confrontational, their debut album 'Strange House' in 2007 shot savage blasts of snarling rock & roll at stunned audiences and divided critics. Acclaimed director Chris Cunningham came out of retirement to film the video for single 'Sheena Is a Parasite' with Academy Award nominated actress Samantha Morton, but the band quickly became self-styled outcasts and were pelted with bottles on every night of their support slots for the Arctic Monkeys. Produced by Portishead's Geoff Barrow, their second album 'Primary Colours' two years later toned down the antagonism as the band swapped instruments, embraced tinges of garage psychedelia and matured into more introspective, alternative outsiders. The critical response was hugely positive and the record was named NME's Album of the Year, nominated for the Mercury Music Prize and was universally positioned high on the end of year polls.

Third album 'Skying' was released in 2011 with the lead single 'Still Life' preceding. They toured the UK performing at festivals including Reading, Leeds and Latitude before revealing their fourth studio album, 'Luminous' in 2014. After supporting Depeche Mode on tour in early 2017 they released their fifth album 'V' with several small preview shows at venues in London.