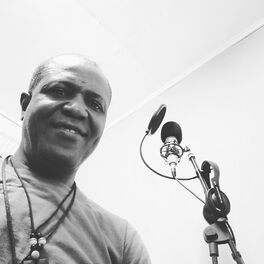 Simon Ngaka is a Cameroonian artist, musician, songwriter, performer, sound engineer, journalist, writer and producer born October 26, 1977 in Douala, Cameroon. Simon Ngaka is of the Ewodi ethnic group of the Nkam department, of the Sawa (people) ethnic group, bordering the Wouri River, which runs all along the coastal and southwestern regions of Cameroon. Born of a musicologist father, Mulédi Jengué Ngallè Gustave, cantor at the Evangelist Church of Cameroon, as well as Sankey and Bellè Enyenguè Ruth Lafortune, chorister at Sion Deïdo, Simon Ngaka knew in less than a decade find its place in the Cameroonian musical and literary universe. Filled with the musical teachings of his dad, who died in 2011, Simon Ngaka launched Saimondy, his production and publishing company and label named after his pseudonym in 2008, to which he provided three websites according to the objectives. With his label Saimondy, he made his first production in October 2010 with the single C’est la femme by Nathalie de Jésus. In turn it will be the turn of Franklyn, Baby Sidney, Dooh Mara, Miky Fasastone, Esty Dolland to go through his label. Simon Ngaka is today one of the musicians whose know-how is in great demand in music studios. As an author, composer and performer, he released his first single in 2015 (Massoma mam), then another in 2016 (To love is to share), and his album in 2017 (Massoma mam) 1. A prolific journalist and blogger, he will commit his first book in 2019, Linked Destinies, then a second in 2020, both published by his publishing house.